BoOkS (in Dutch)
Even now & Cement - Life stories of Auschwitz survivors
Turning point - About personal crises and chances
Who is crazy, actually? - About the therapeutic relationship
Do not disturb - A critical discussion about the mental health care
Ten composer portraits in word and image

THE GIRL AND THE WOLF

The girl arrives with her mother, sister and little brother in the concentration camp. 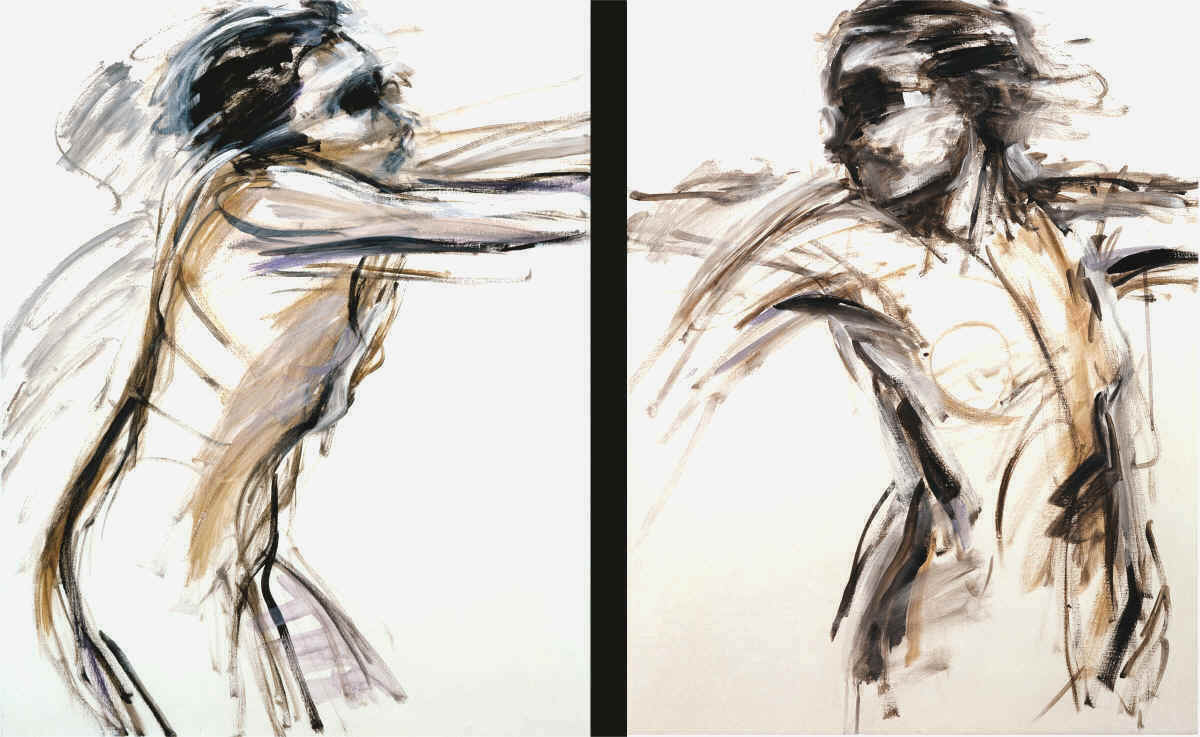 She is separated from her sister. 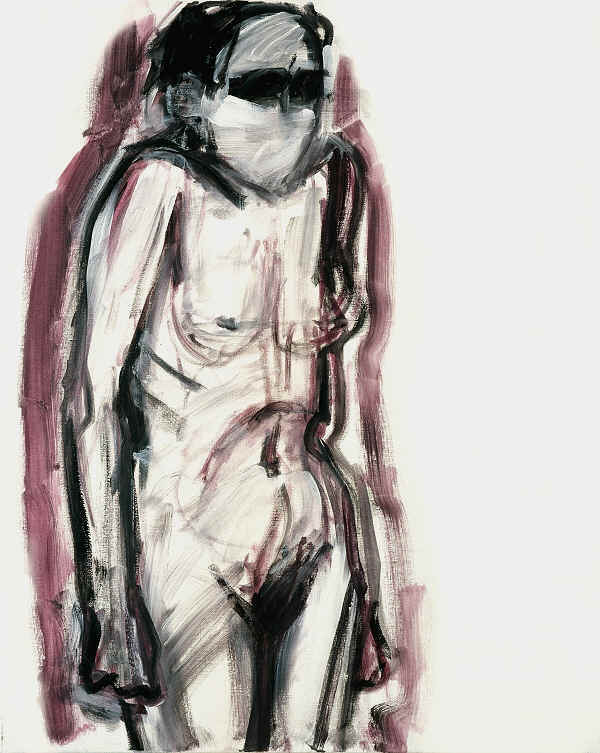 The girl is shaved, inspected and numbered. 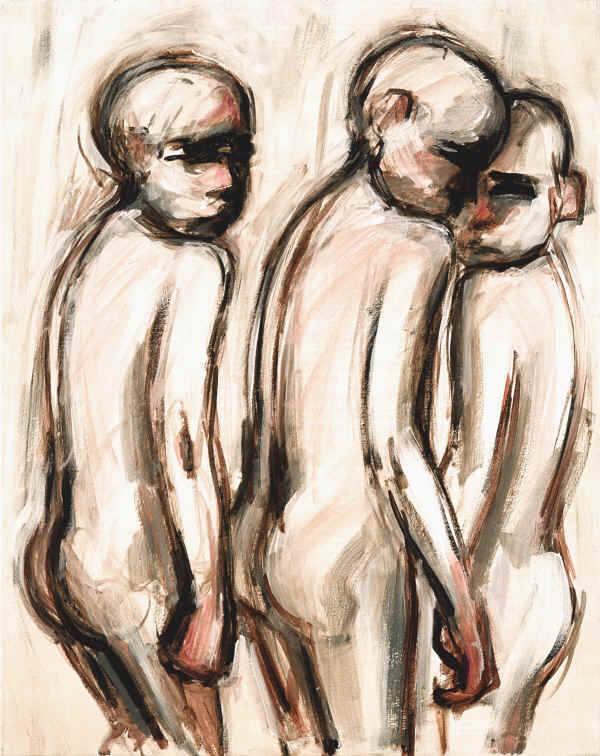 So are her little brother and the other children.

The girl’s mother is taken away and does not return. 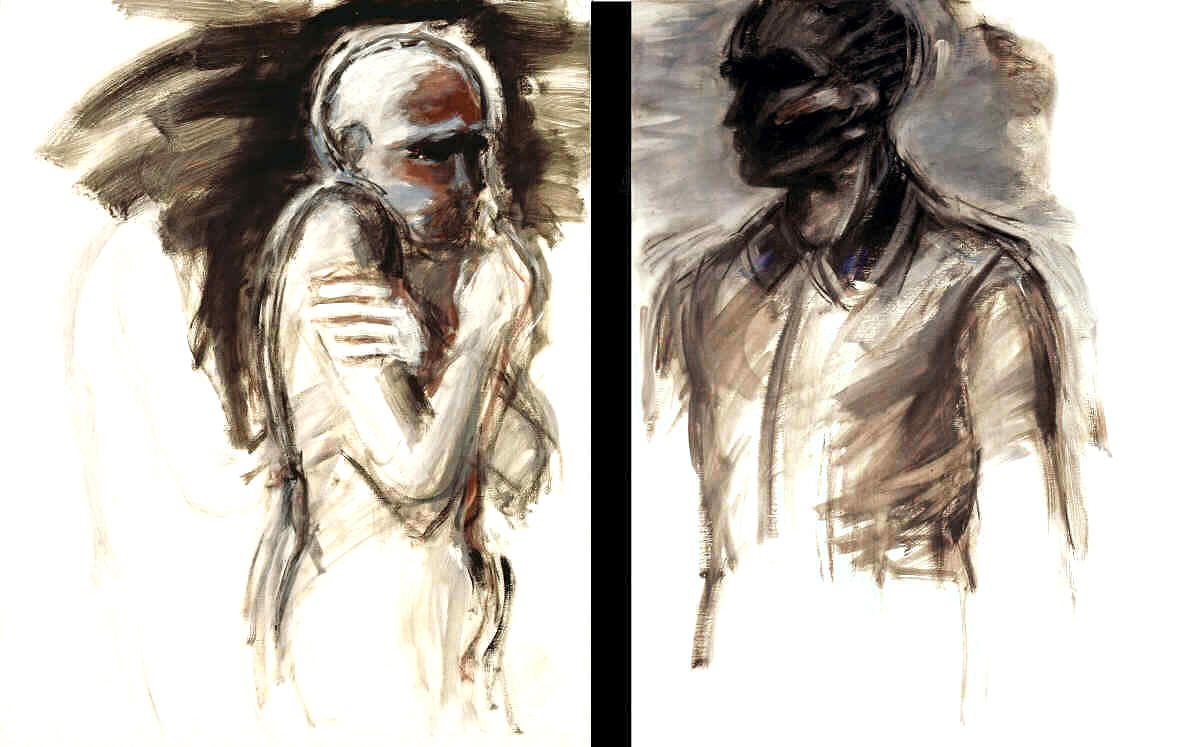 Wolfgang has an eye on the girl. 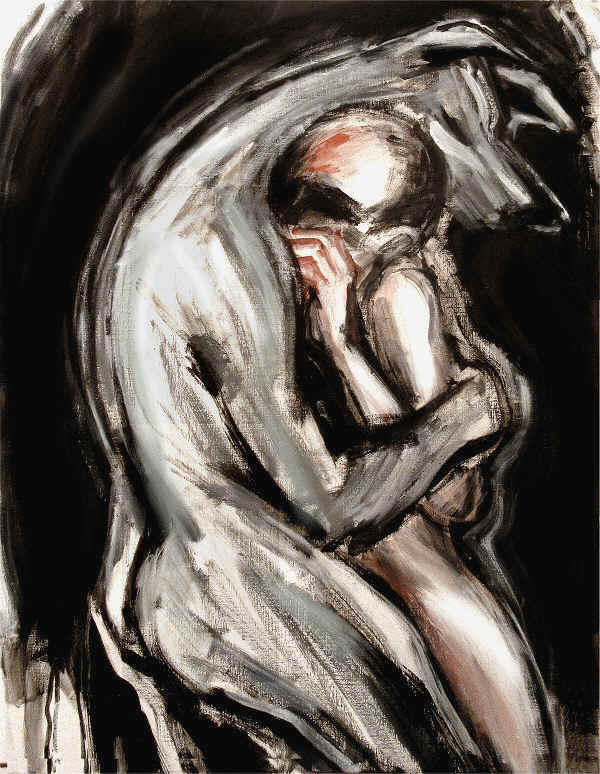 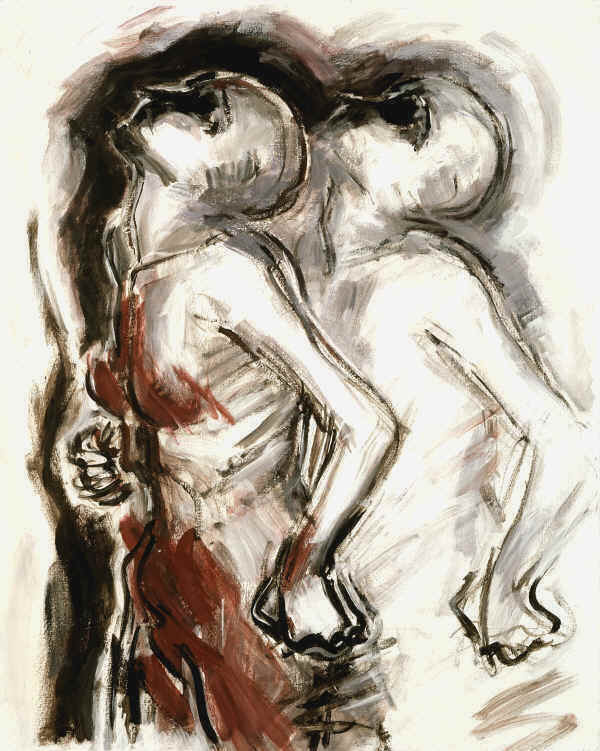 The girl tries to escape from herself. 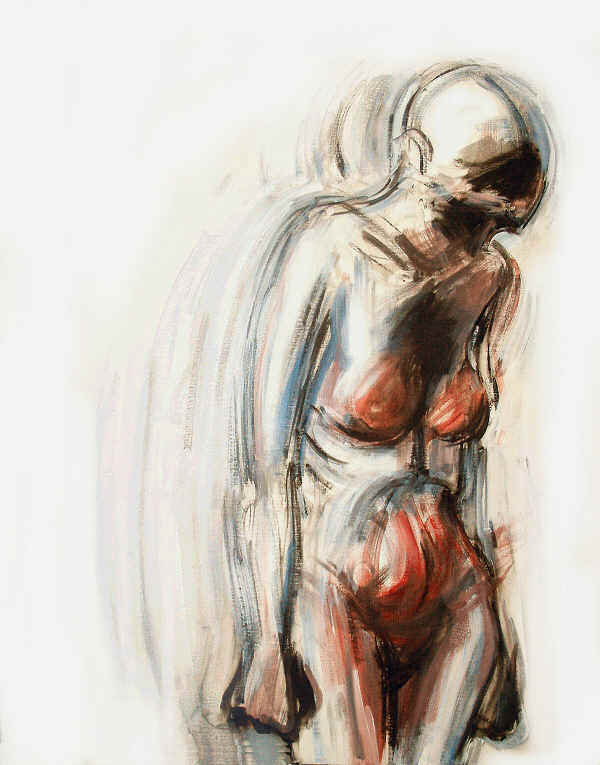 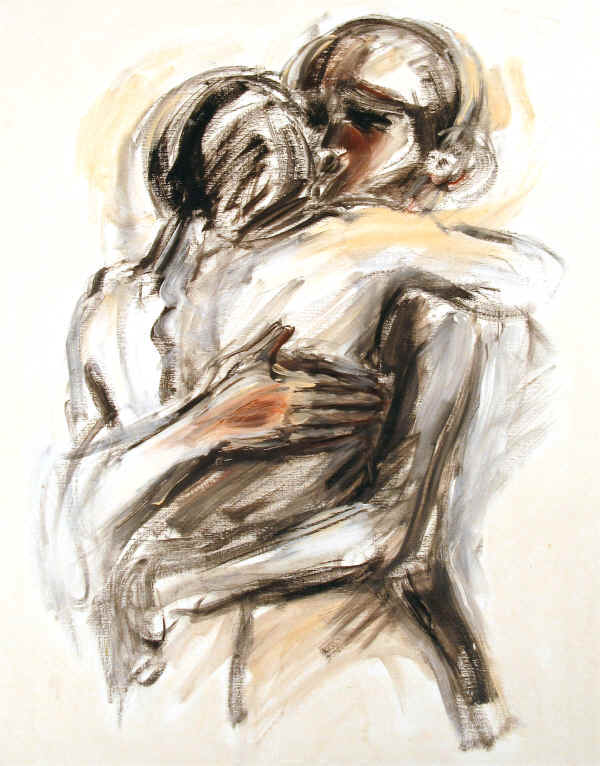 The wolf takes care of the girl.
Thus she is able to comfort the others. 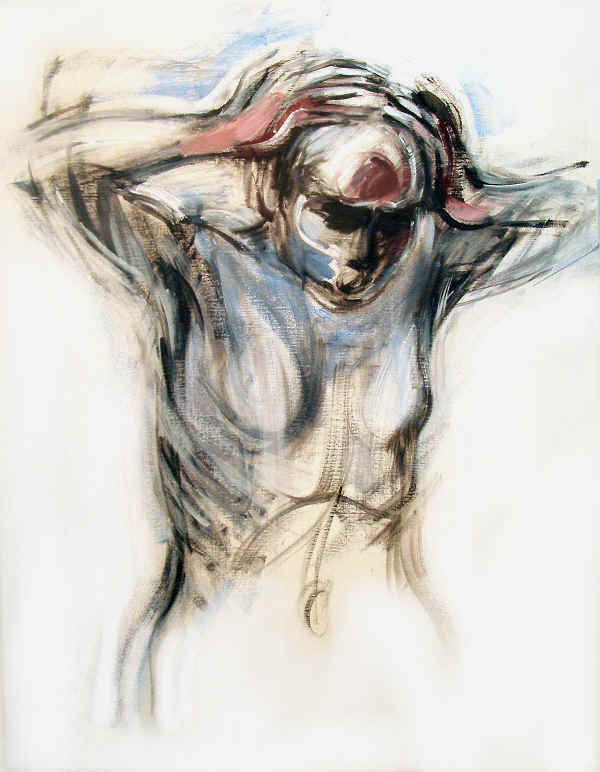 The girl is torn apart inside. 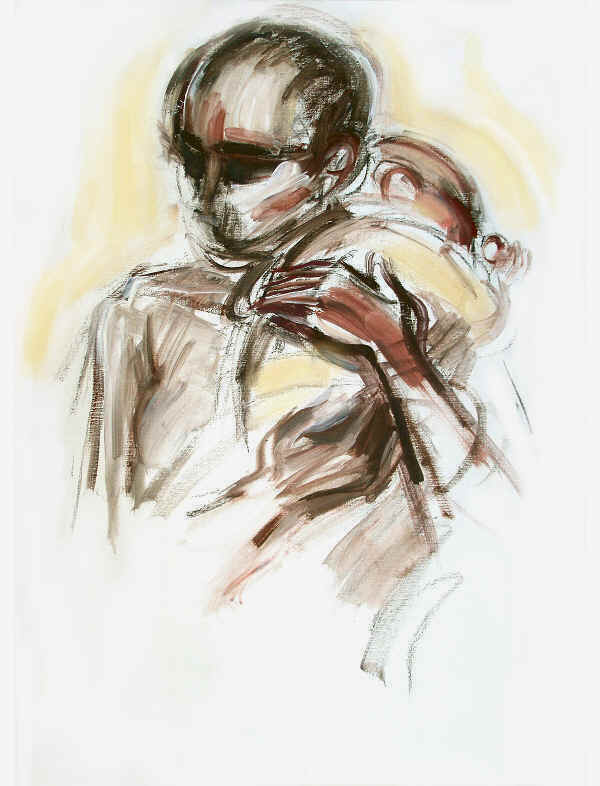 She gives birth to a son.
The baby is smuggled out of the camp. 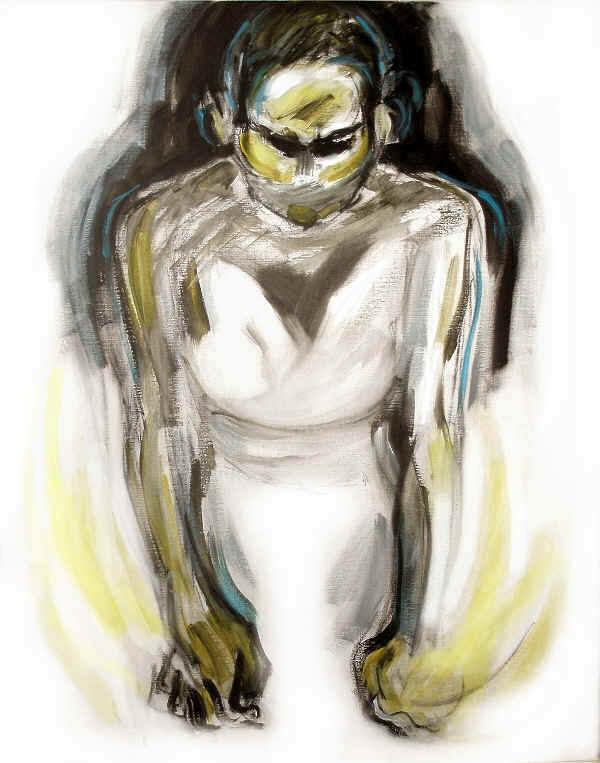 The blond woman is jealous of the girl and the wolf. 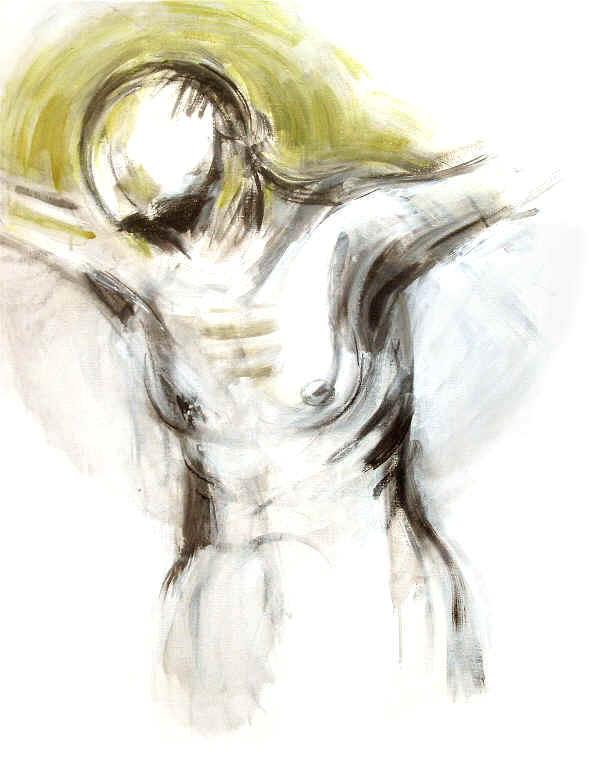 The wolf flees the camp.
The blond woman tortures the girl. 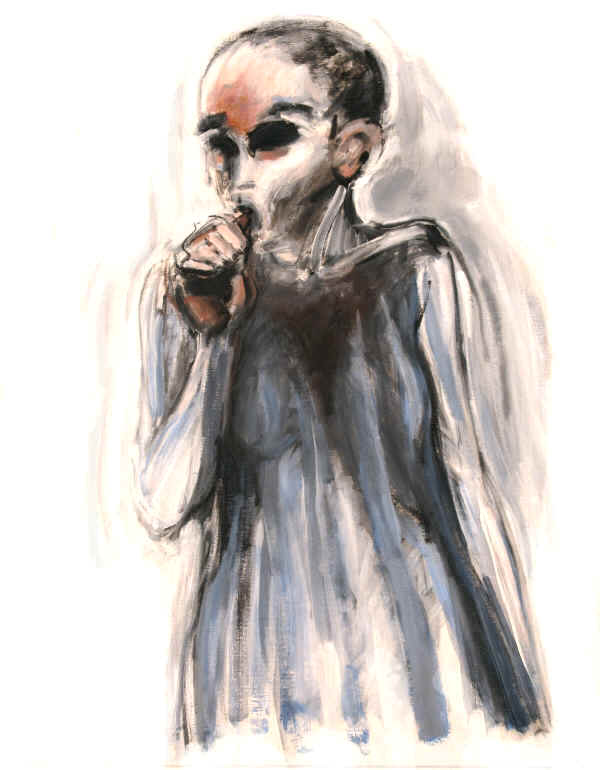 The girl no longer eats or drinks. 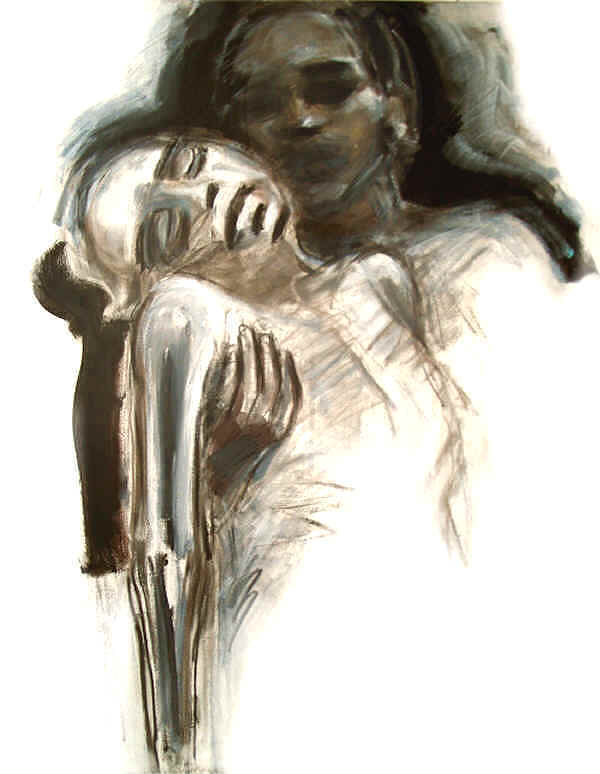 She dies.
The blond woman finds her body and feels remorse.

And the girl returned in order to free herself from everything.

The first version of the series, dates back to 1995 and consisted of eight triptychs with an accompanying text - a format which was adapted to the architecture of the Amstel Church in Amsterdam where the cycle was exhibited for the first time.  In 2016 the series was revised. From the original series of twentyfour paintings nine works were selected. Eleven paintings were created again (the nature of the images stayed nevertheless the same). Furthermore, the paintings are no longer divided in triptychs. At last, the accompanying text was shortened.  Thus a cycle of twenty paintings was created which not differs from the first version from 1995 with respect to content.

A reproduction of the revised cyclus of paintings (1995/2016) together with explanations is kept in the archives of
- Yad Vashem in Jeruzalem
- US Holocaust Memorial Museum in Washington
- Simon Wiesenthal Center in Los Angeles
- NIOD - Institute for War, Holocaust and Genocide Studies, the Netherlands

The first version of the cycle as created in 1995 was exhibited three times in the Netherlands:
- Amstel Church in Amsterdam (1996)
- National War and Resistance Museum in Overloon (1998), complemented with three maquettes of concentration camps
- Center for the Arts in Alphen aan de Rijn (2006), on the request of Simon Speijer, a personal (Dutch) friend of Simon Wiesenthal.

"Confronting and moving; a statement, but not only that. Also an impressive and beautiful work of art." (De Gelderlander)

"Painted in sober colors and with virtuose brushstrokes, the work makes a deep impression." (Centraal Weekblad)

"Images, still and moving, subdued and expressive. What a world Saar Roelofs evokes by her brushstrokes." (Zinweb)

"The work excels in its simplicity."(Dagblad de Limburger)

FROM GUESTBOOKS AT THE EXHIBITIONS

- "Very confronting and intense - at the same time subtle and with compassion."
- "Impressive. At first I was sceptic. Later I was silent."
- "Sensitive paintings in a beautiful style."
- "The gruesome reality is expressed in a personal and poignant manner."
- "The paintings can show me (us) the unimagible. I am touched in my soul."
- "Very impressive images. Courageous and precious."

FROM THE INTRODUCTION to The girl and the wolf,  with the title LIKE AN AXE IN HARD FROZEN ICE,  BY HANS PAALMAN ON THE OCCASION OF THE 1998 EXHIBITION

From letters AND E MAILS to the artist

"A powerful statement of universal application." (Jack Boas, author of a.o. Boulevard de miseres. The story of transit camp Westerbork and We are witnesses. Five diaries of teenagers who died in the Holocaust)

"Interesting and moving." (Helmuth Braun, Head of Exhibitions of the Jewish Museum Berlin)

"Provoking and poignant images. Very much of current interest because of its possibilities to deal with the past."
(Erik Somers, historian  NIOD - Institute for War, Holocaust and Genocide Studies, the Netherlands)“

"Moving work. It touches me." (Isaac Lipschits, Professor Emeritus Contemporary history and initiator of the Digital Monument of the Jewish Community in the Netherlands)

"Powerful and exceptional." (Marcia Reines Josephy, former director/curator of the Los Angeles Museum of the Holocaust.)

"This moving and original work stimulates adults and children, regardless their cultural background, to think about victims and perpetrators, each in their own role involved in the same disaster. An unheard actual document." (Prof. dr Etty Mulder, former head research project Holocaust in the Arts, Radboud University Nijmegen,  the Netherlands)

The storyline of The girl and the wolf is partly based on Simons Wiesenthals book Max and Helen, a true story. The core of this story is as follows.

At the beginning of World War II are Max and Helen young lovers. Both are Jewish. Together with Helens sister Miriam they end up in a concentration camp, run by the sadistic camp commander Werner Schulze. Max and several others escape from the camp. Helen refuses to escape because Miriam is too weak to join them. She decides to take care of her sister. Helen is raped by the camp commander, who is committing - in terms of Nazism - ‘miscegenation’, for which there was a high penalty in Nazi Germany. He becomes attached to his victim and forces her to live in his house. Helen continues to submit to him in order to keep Miriam alive. The price she pays for this 'favor' is that she despises herself.In the end, Miriam is killed and Helen gets pregnant. The camp commander spares her life. Helen survives. After the war she gives birth to a son.

Deportation, an early work on the Holocaust